Chai of the Tiger is made with the distinctive fragrance of star anise, ginger, black pepper, cinnamon and cardamom. We use organic black tea, and have added guarana and ginseng for energy, clarity and focus. 100% Australian made and owned.

Drinking a Chai of the Tiger latte will bring a lasting surge of ENERGY/FOCUS/CLARITY.
Our Alchemist has precisely blended this elixir for both enjoyment and its stimulating effect, so for those who need to concentrate, be active or stay alert, Chai of the Tiger will amaze and delight you.

Ginseng has for centuries been used in the east for its stimulating properties. It is known as the ‘Root of power’, and whilst not exactly a stimulant.  It is a useful herb to combat stress and fatigue, to maximize stamina, and to build strength.
Guarana has a stimulating effect stronger and longer lasting than the caffeine in coffee. It is also an appetite suppressant and enhances cognitive function.
Star anise has a history as an aphrodisiac, as well as a digestive aid, the distinctive liquorice taste is the first thing you will notice in Chai of the tiger.
Ginger has a long history as a digestive aid, and the warming flavour is found to be quite stimulating.
Black Pepper increases the metabolic rate, aids digestion and has great antioxidant properties.
Cinnamon’s distinctive fragrance has been shown to give improved brain function, improved digestion and also decreases the risk of heart disease.
Cardamom is a great stimulant that also aids digestion, improves circulation and enhances appetite. 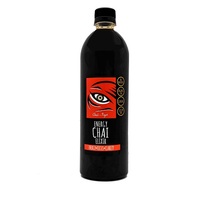